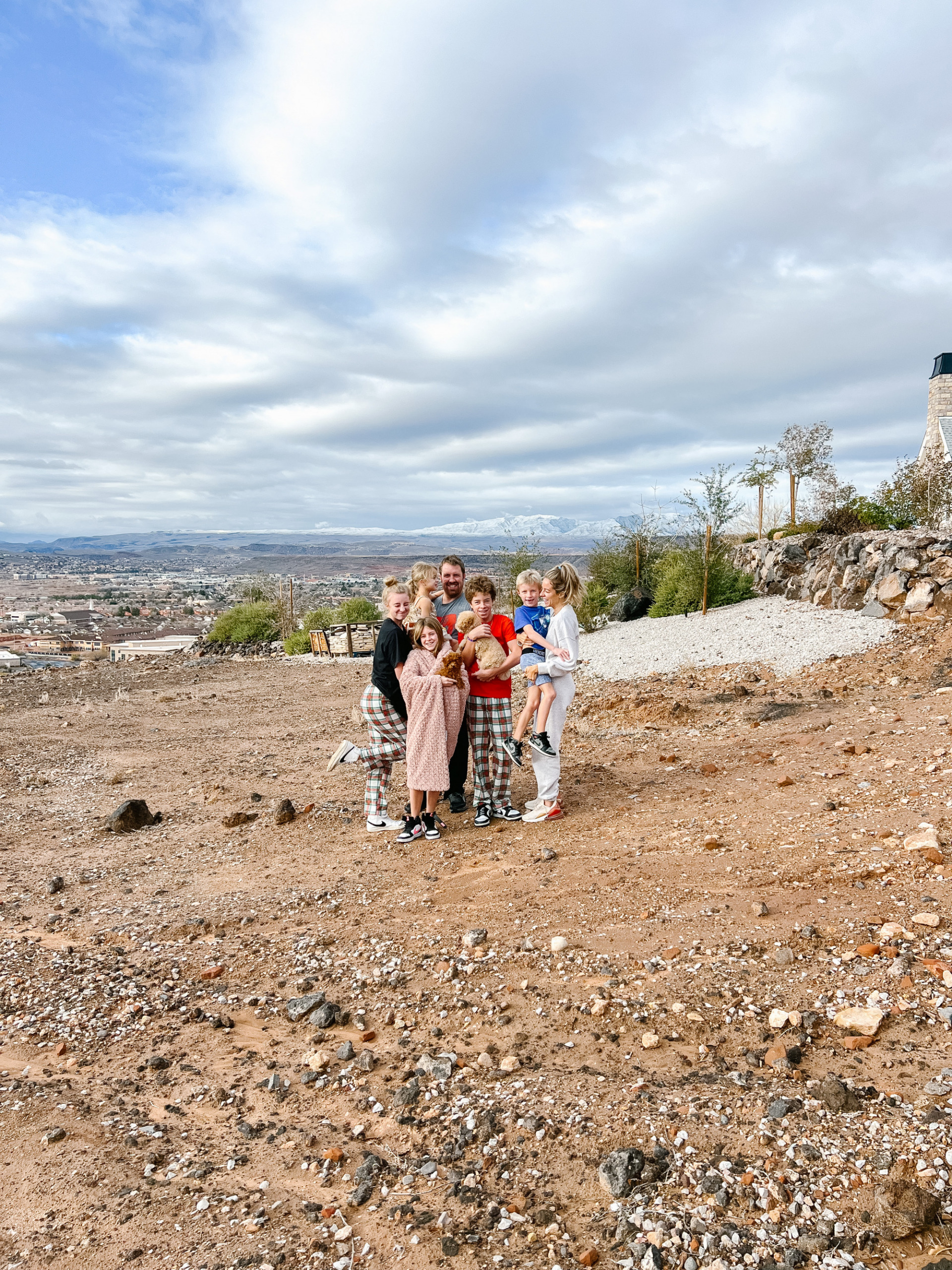 We’ve got some BIG news to share with you all!! We are moving to St. George!! Back to our hometown.

WE FOUND A LOT that’s perfect for our family and we can’t wait to start this whole journey again. Right where we are meant to be!

: THE STORY OF HOW IT ALL HAPPENED

Going back to August when we shared that we weren’t going to build on our dream lot (here’s that blog post), I had hundreds of you in my DM’s asking “Why aren’t you building anymore? What happened? What was wrong with the lot?” etc. I also had a ton of people telling me that they had done the same thing… that they too had backed out on lots and dream homes that simply just didn’t feel right. But to answer those questions, there was nothing wrong with the lot or the location. It was perfect. We did the research + tests and had prayed about it 2 years prior, and it felt like that was the place we were supposed to be.

Once we had sold our old home and were getting closer to breaking ground, it just didn’t feel right. It was such a difficult time for me… I kept having thoughts that “maybe we shouldn’t have sold our old house”. Joe and I had visited the lot on my birthday and I had the feeling that we weren’t supposed to build there. I didn’t dare tell Joe I was feeling that way. But a few days later, I told him that I just couldn’t do it and that we needed to sell the lot and he told me that he felt the exact same way. So that decision was so easy for us, we felt 100% right about selling the lot and our house plans. Even though NONE of it made any sense. We didn’t know why we felt guided to sell the lot, we just knew that it felt completely right. And that was the only thing I had complete peace in. I know that it was the Holy ghost or whatever you believe as your Higher Power. But I knew that it was God guiding us and helping us to find peace in this unknown.

If you’ve been around here, you knew that we started to look for different lots. We even put an offer in for 6 acres in Bountiful and totally felt like that was where we were supposed to be. Our earnest money was about to go hard on this lot and then we found out that a road had to go through the whole 6 acres. So with the seller we tried to fight it + even called a few lawyer friends. It was becoming a big deal and then we started having our doubts. In the meantime, my parents bought a lot in St George. They are very thought-out people and like to discuss things with us and chat. They don’t do quick-spur of the moment kinda things. But they called us and told us that they had bought this lot and we were all shocked! My parents said that whoever moves to St. George first can buy the lot from them. Joe and I knew that we weren’t going to move down to St. George for another 10-15 years so we didn’t think too much about it. THREE DAYS after my parents bought the lot, we got a call from the St. George hospital (on a Friday) and they wanting Joe to come down for an interview Monday morning. We were SHOCKED! So Joe and I drove down Sunday night, his interview was 8 hours long Monday and we drove back home that night.

We got home from the interview and just waited for a response. It was the longest week of my life! We still had our earnest money on the lot in Bountiful which was supposed to go hard on Friday. Thursday morning and we still hadn’t heard back from St. George yet. Then came my meltdown. I felt like I had held it together pretty well, but I finally just broke down. We needed to know what was going to happen so we could make a decision with the Bountiful lot. I begged Joe to email the St. George hospital and see if they could give us an answer. (but of course he didn’t. haha) But within a couple hours, Joe had come home and told me WE GOT THE JOB! I literally started bawling. It was just such a relief and an answer to our prayers. We were just in awe of God’s timing in all of this. None of this made sense why the first house sale fell through, why we had to move out in 10 days, then deciding not to build on the lot we had designed for TWO YEARS, all the chaos, etc. Nothing at that time was going to plan the way we expected but it all made sense when we found out about Joe’s new job in St. George. As we reflected on all the chaos, we realized just how everything was in God’s timing.

This all happened a few months ago, so we’ve been able to digest everything and make sure that St. George is where we need to be. It’s been so hard keeping this news from all of you! When we went down to St. George to look at lots and we ended up buying the lots from my parents! Joe and I were nervous about living so close to my parents AND across the street from Joe’s parents! But we prayed about it + know it was all meant to be. We are truly excited to be in St. George and SO close to family. We have seen God’s hand in this whole situation. This has been His will and we’ve been open to listening to His plan because obviously His plan is always better than our own plan. This is something we didn’t think would be happening for another 10-15 years but the way this has worked out is better than we could’ve ever imagined! The kids are so excited but also have mixed feelings about leaving friends and leaving their schools here, but over all they are thrilled!

Next week on the blog I’ll be sharing all about when we’re moving and our plans for St. George so be looking out for that!

30 DAYS TO AN ORGANIZED HOME